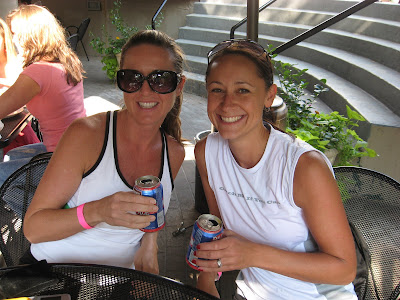 The moment you have all been waiting for is near.

First things first. We got down to the race area a little early (I'm never one to be late) so of course, a "pre-race" drink is in order. I'm channeling Jackie O with the glasses. Denver Running Gal always has a big ol' smile (especially with a beer in her hand). 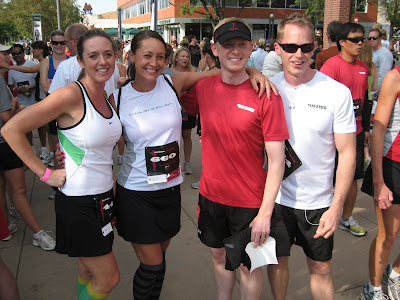 Met up with my guest blogger, Clinton and his friend T-Bone. (I just made that up.) According to Clinton, we were the best dressed there. Actually, everyone was dressed the same. 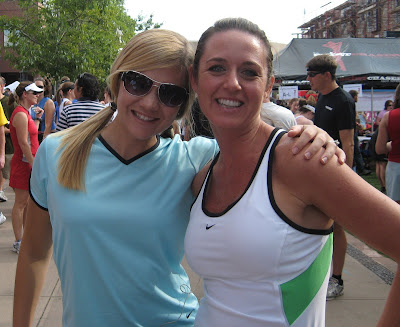 I also experienced my first "blogger met up" with the darling Running Duff and her hubby. It was his first race ever and he did great. They were so fun (thanks for the beer).

I never saw Vanilla, although I did look for him and his dirty hat. I hope this doesn't mean I have to send back all the money you guys sent me to sock him. Cuz that money is already spent.

The race starts with all the ladies in their skirts up front. Then 3 minutes later, the guys (skirt chasers) get to start and they try to catch us. Well, they almost did, but a girl ended up winning the race. The atmosphere was fun and festive and I really had a great time. 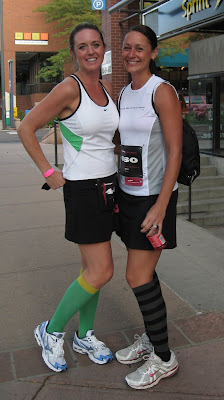 The skirts were surprisingly comfortable to run in. The "undies" part didn't chafe or rub (at least on me). BUT... let me tell ya - this race could have easily changed it's name to "ASS CHASER 5k." I saw more ass than a political convention.

Some of the ladies must have purchased the "g-string" version because when the skirt flipped up a bit while running, the cheeks were hanging out the bottom. Lots of cheeks, floppin in the wind. It did make the run go fast and was fun to pick people off. By the last mile, my lungs were burning from the altitude and I did get a little dizzy for a minute, but "legs keep moving" is a great mantra to get through that.

Besides totally rockin' the knee highs, here are the digits:

You look too cute! Congrats on a great race!

That looks like so much fun! Does everyone wear the knee highs? Congrats on the PR!

I'll have to keep an eye out for these g-string running skirts. Great job on the PR!

You're super cute in your outfit. Congrats on the PR especially in that altitude.

Love the skirt. Mine definitly does not look as cute! Great job on the PR.

PR and a fun race! Great.

Not punching Vanilla? Not great.

Sorry I missed you... or maybe not since you were going to punch me. Congrats on a great PR, you know you get to take another 10 - 20 percent off that time since it was accomplished at altitude right? At least, that's what I do.

I'm glad you had fun here in Denver.

You did awesome! Your speed has really picked up. Great job. Love the socks.

I love my skirts! You'll never want to run in shorts again. But yeah, we could do without the cheeks flappin.

Awesome run! Looks like you had a great time.

Love the Jackie O glasses and the cool knee-highs.

That is fast! Running in a g string sounds very painful. Ooff the chafing...

Wooohoooo!!! WTG with the PR... great pics that looks like a great time....

You are ROCKIN' those socks!!!

I'm glad you posted all the pictures! Cute :) Makes me want to invest in a running skirt and knee highs fo' sure!

Ooohhh girl it looks like a fab time! I *heart* the Jackie O's. Very nice! You look awesome chica, and a killer time on that race, especially with the altitude. Whoot!

You look GREAT POM!!!! SUPER CUTE!!!! It sounds like you had a great time, and looked hot doing it, doesn't get any better than that! I bet your skirt was being "stalked"!!!

What a clever race!

Not only do you look smokin' but girl, you kicked A$$!! Nice PR!

Re: your comment on my blog....
Of COURSE I am still up for a meeting! Just because I am throwing in the towel on the Nike Women's Marathon doesn't mean that I'm not going to come out and support the people at the PDX-a-thon. =)

great job! I saw both your knee highs go flying by me.

If I'd known I would have yelled- or maybe not. Don't want to be punched by association w/ Vanilla :)

Wahoo! Way to rock a PR at altitude. Love the Jackie O sun goggles and the knee-highs. Great way to distinguish yourself in the crowd.

Maybe next year they won't cancel the SLC race (or maybe I'll make the trip to Denver). = )

Congratulations! I love the knee-highs, those are so cute! I love my running skirt, but now I will wonder about my butt hanging out!

You two look so cute, too. Great race time up there mile high!!

okay...so the two minute pr at elevation is cool and you had a good time at the race and met cool people...

but you failed to mention that you were going to wear green knee hi socks. seriously. that's the highlight right there. [not to mention they're oregon colours! go pre!] the knee hi's rock.

Such a great outfit. :) Congrats on the PR and great race!

Lookin' super cute in your skirt, very happy, and a speedy 5K. I'd say you had a great race!!!

Awesome! Looks like a great time. Great job on the PR...that is one fast 5k! I think my fastest was like a 30:30...my tall bod is not build for speed, nor really for distance...but heck I love it so I do it anyway.

P.S. I'm committed to once an week Bikram...I think I may be hooked! (I LOVE walking outta there all sweaty...such a glorious feeling. I could do WITHOUT the stank though.)

Nice job on the race and the new PR! Love the socks!

awesome skirt! I have a couple, but hate running in them - too much chafing.

Alisa & I are rocking the Bikram - thanks in no small part to you. The stank bothers me less each time, and I'm feeling pretty strong.

I was out running (yay!) today, and was on the marathon route - sad I won't be doing it, but I'll be there to cheer you on!

you looked darling! very cute! you look like you're gonna play tennis! I wonder if the knee high socks would work with tennis..he he

You look so tiny and cute! way to go on the PR - that's awesome!!! Love the skirt! and socks.

Very nice. Love the concept of the race, though I'm disturbed by the number of booty shots.

Looks like you had a great time! And congrats on your PR. Smokin'!

Now that sounds like fun. I had been told about the event by some running buddies. Glad you had a good time.

you do look SO CUTE.

Id wear OTK socks in my skirtchaser but I fear it's still gonna be 100 degrees here.

Great pictures, awesome PR, and fantastic outfits! Sounds like a really great time all around!

Pre-race BEvERage? I love it. You could easily be a Hasher!

That's fantastic! And you look so cute!

A good race time and congrats for your PR!!!.
And a skirt race is nice to see i think ;-).
Groet Rinus.
http://rinusrunning.punt.nl/?home=1

Well done! It was a fun race, impressive to set a PR at altitude, did you even notice it?

Congrats on the PR! WOW!

And you are one skinny mama -- stop worrying! :)

Dude you're looking supah hawt! Great job on the 5K and thanks for all the fun race day shots!

Lily on the Road said...

I LOVE the socks! Congrats on the PR

Brings back very fond memories of running at lunch to cruise Sacred Heart (our all girl school counterpart).

Way to funny on the thong/flapping cheeks, maybe they should wear them on the outside of the skirt.

Great job on the PR! I love running skirts!!! I've officially quit buying shorts, b/c of them. :)

Congrats on the race!!! I am especially jealous that you got to meet Christine... I have to wait till January. And I STILL don't have a race planned that you're doing, which definitely needs to happen!