Pieces of My Year... In Photos

Since the cough and cold medicine has dried out all my creative juices, I thought I would follow in Vanilla's steps and review 2007 "Pieces" style. Are you ready? 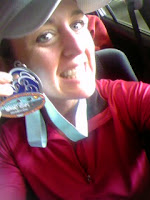 I had been running for a few months and just starting to get excited about it. 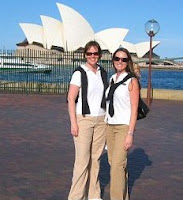 Feb 2007 I ran my first Half Marathon on Super Bowl Sunday in Huntington Beach, CA. My time was 2:04. I loved it! I also did a lot of exciting traveling this month - Costa Rica and Australia!

Mar 2007 This was an exciting month for me. I met The Captain and ran a 10K in Seal Beach the day after, in which I PR'd totally HUNG OVER.

Apr 2007 Just spent the month getting to know The Captain and having fun. Pretty mellow. 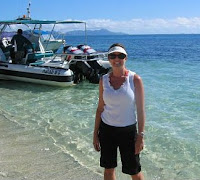 May 2007 Stayed at the Phoenician in Scottsdale for a week. Then went to Palm Springs over Memorial Weekend with The Cap. Very relaxing and fun.
June 2007 - My best friend calls me up and talks me into training for a marathon in the fall. I think it's a great idea (uhm... ok?) Also went to Fiji for the first time (AMAZING!) 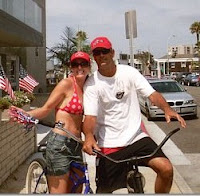 July 2007 - Spent 4th of July in Newport Beach with friends. This was the last of my flat tummy (proof in the photo). After this, 10 lbs came creeping back - blame it on the Captain for sure!

Aug 2007 - Not much to report. Except EL CAP and I kicked butt in a bowling competition with friends, in which they have yet to pay up!

Quite the year in travel and running. Careful or we are going to start hating you.

Great post! What a wonderful year you have had!

Who's the skinny bitch now? You look amazing in EVERY photo!

Sounds like a great year. Here's hoping 2008 is even better.

Wow, you've had a great year! I envy you all the travel you get to do!

Fantastic post, awesome travel pics!! Best wishes for a great 08! I love that marathon pic, U rock POM! OK too much vino 2nite I have
(!!) all through this comment.

good one... totally enjoyable. And yeah your stomach looks FANTASTIC in that pic!

Love the pics! You and the 'Cap are adorable! Looks like quite an accomplished year! Can't wait to see what happens in '08!

All that traveling, you are one lucky girl!

The pics and the year in review was great! Really enjoyed it. I've been MIA from blogging for a while, so just got caught up on all that's been going on. I bet you are glad the holidays are done.

Thanks for talking about the weightloss goals. Reminds me to get back on the wagon, although I wasn't too bad through the holidays.

Looks like you had a FABULOUS year! Hope 2008 is just as great (or better)!

damn! you been everywhere!