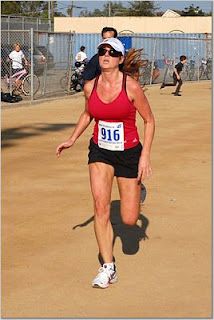 Ok - it's after lunch. Actually, i was so excited to post again that i shoved my salad down my throat with hardly tasting it. Who cares - it was just salad.
So, since this blog will mostly be about my running, I thought a brief history was in order.
I started running about a year ago exactly. I had recently lost weight (story for another blog) and realized it's alot easier to run without lugging an extra 30 lbs around. So, I started to jog. A little at a time. Very little. Then a friend of mine suggested that we run a fun 5k. Sounds like a great idea. I made a pretty good time - I think like 27 or 28 mins. (See pic attached) and it was so fun that
I GOT THE ITCH...
For a little challenge, I decided to sign up for a 10K. Luckily there was one about 3 months later. I ran it with a girlfriend and had a blast! It was Thanksgiving and I wore a feather in my hair. Then went to a big family dinner and pigged out!
So, after that - what's next? Of course - a half marathon. My 10K friend agreed to run it with me (THANK GOODNESS). I did online research and created my own traning plan. I really struggled the last 2 miles, but came out with an ok time of 2:04. My goal was under 2hours, but who do I really think I am? hee hee. That was in Feb 07.
--Update--I forgot that I ran the Seal Beach 10K in March. I was totally hung over - the night before is when I met El Cap. I was having such a great time that I over-consumed the adult beverages. Suprisingly my time wasn't too bad - like 56 mins or something. Although I thought the grim reaper would be waiting for me at the end.
Since then I have just been running a couple times a week with longer runs on the weekend.
My Denver Gal Pal talked me into trying a MARATHON. After thinking long and hard, I realized it's the perfect new challenge for me. And it will be the most fun of all becuase my best friend is flying down to run it with me! Actually, we now have a group of four awesome (and hot) chicks all running it together.
FOUR MORE WEEKS until the Long Beach Marathon.
Training updates coming next week.
Posted by P.O.M. at 12:51 PM

Welcome to the running blog world! And you'll love Long Beach's marathon. At least the first half has great scenery and a mercifully flat surface. It can get lonely on the second half, but it seems like more and more people do that one each year. I hope the weather's good for you.

Wow, your first half-marathon time was great! And congrats on losing the weight, quite an accomplishment!