Not that anyone is really reading these (besides you Aunt Julie) but you may have noticed that I have not blogged in a few days. I haven’t really been feeling up to it. Here is what happened:

I took Friday off of work to have a leisurely day before going to a wedding that evening. I had big plans for my day off – yoga class, tanning (I KNOW it’s bad) and then a pedicure. I have been doing Bikram Yoga for almost a year and a half. However, since training for the marathon, I have totally slacked on yoga. It’s time consuming (1.5 hr class) and just doesn’t fit in my schedule right now.

I know it’s controversial, but I love Bikram Yoga. I love the sweating and the poses and especially the savasnas. The 105 degree room is a bit stinky, but you get used to it. When I leave the class, I always feel cleansed. I know that sounds creepy, hippy weird, but it’s true. And lean. All that sweating helps you get really lean. I was probably at my healthiest and thinnest when I was doing Bikram regularly. So, what a perfect way to start my weekend. 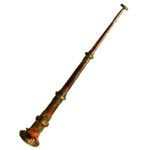 This Friday, we had a special treat after yoga class. There was a guy there doing this meditation horn thing. Now, I’m not really as hippy as I sound, so I don’t know what it really was. I think it was like a Tibetan Horn (see pic). As we were in our final savasna, he started. First there were bells, then some gong sounds I think, then the horn. As he played, he moved around the room. You could actually feel the energy moving around the room. After about 5 mins, he was done. I relaxed for another minute, did a few extra hip stretches, and then headed out of the room.

As I was putting on my flip flops, I was feeling a bit dizzy. So I sat down in the lobby to take a few breaths and cool down. But it got worse. Someone sat down by me and asked if I was ok. I tried to say something, but I know my words weren’t coming out clearly. Then I blacked out. I could hear people talking and I came to again. Now, I was feeling very sick to my stomach. I did not want to puke in front of anyone, so I held it in. Someone had called my boyfriend to pick me up (thank goodness). Once El Cap got there, he walked me to his car. As soon as we pulled out of the parking lot, I asked him to pull over. I was sick all over the sidewalk!

So, I laid around for the rest of the day – almost going in and out of consciousness. I wasn’t blacking out, but I definitely wasn’t all there. The horn thing is supposed to be really cleansing, so maybe all the toxins in my body were just trying to get out. I had a headache for a couple days after. I’m feeling better now, so hopefully I can get some exercise in tonight. At least a walk or something.

Holy crap, that is freaky. I've gotten sick and goofy if I had an abnormally hard workout. I hope you are doing better. So sorry you went through this. It sounded awful.

Take care and stay away from the horn. :D

Damn girl! They cleansed you alright!

Glad to hear you are feeling better though. Blacking out is the worst feeling EVER! Especially the wanting to get sick part. Happened once to me when I was giving blood. Yuck!

Hi POM! Thanks for the comment. Scary about blacking out! Maybe it was a hydration issue? Never tried that yoga but it seems too intense for me--you go girl!

Yikes! I was liking the thought of Bikram Yoga (I'm sure it has to do with your mentioning when you were doing a lot of it your were your thinnest and healthiest). But that's really scary - the blacking out.

I have felt bad and thrown up if I have run a long distance and have an empty stomach. It's not a good feeling.


Glad you are feeling better!

Yikes, be careful! I think yoga has been a great addition to my running and I have tried bikram a few times, I like it cause I like getting all sweaty I feel like I accomplish more. :)

Now that is super scary!!!!

Did you figure out what caused that?

I hope tha tyou feel better and that the wedding was a good time. My mom give me crap all the time about getting married. *sigh* In due time mother... in due time.

P.O.M. -- DEFINITELY noticed you were not blogging. I'm really sorry you weren't feeling well and I'm glad to hear you've been taking care of yourself. I just started taking yoga myself (hatha) and I am surprised how much my muscles ache the next day. It's a surprisingly good work-out. Take very good care.

I literally told someone yesterday that I wanted to try that yoga class. I wonder if I could find a place around here. (o:

Today something similar happened to me. I've been doing yoga for 2 months now, but today was my first Moksha Yoga class. We were about two poses in and i think it was a sun salutation where we had our head back and chest open. As I came out of the pose, I felt so weird! I started to feel very dizzy and when i tried to focus i noticed it getting worse. I couldn't hear anything, i was tingling all over and sweating. I didn't feel like I was in all-there either. I was worried because i felt sick and faint and if i didn't sit down i would have fallen over. I lay down in Savasana for half the class until i was able to join again. I still feel a little odd and i have a headache. Hopefully it will pass. But it was a scary experience and i wonder why it happened.

I hope the experience you had is behind you and that you are doing well. Let me know. :)

I didn't read you when you wrote this....BUT I've seen people pass out/black out & puke.

One guy used to puke after EVERY class.......he refused to drink in the class---I think he was a wrestler. (not like WWF).

Anyway, it was the music flute/horn thing........they told me it can be very intense & makes some people sick. I've never done the class there they use it, because I'm a chicken shit & I can't be sick.

BUT good to knwo I don't EVER want to be in the class with that!!!