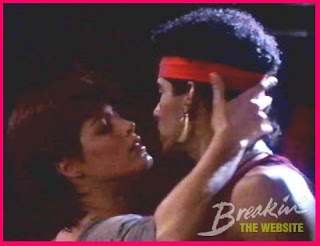 I do.
I was out on the front lawn
dancing with my best friend.
We had mad skillz.

Traditonally trained in tap, ballet and jazz,
we were so good, the older boys on the street asked if we wanted to be in their crew.
Yeah, that’s right.
The Flintstone Lane Crew wanted us for our hot dance moves
(or because my best friend had a kick ass ghetto blaster.)
Well, whatever the reason, we were in.

The combination of the boys’ pop-lock moves and our jazz moves made us serious contenders for anyone who wanted to battle. There was some trash talkin’ coming from Prescott Lane. And there is only one thing we could do about it. Take it to the streets. So that summer we had our first (and only) Dance Off. I don’t even remember who won, but we maintained our rep, and that’s all that matters on the harsh streets of Huntington Beach. Yo.

Basically, we were livin’ the dream. We totally idolized “Kelly” from “Breakin” and “Breakin 2 – Electric Boogaloo.” I wanted to be her and for the summer of '84, I thought I was.

And last night, I brought it back. 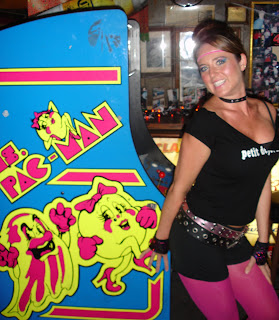 Songs of The Day:
Ain’t Nobody by Chaka Khan
and
Freakshow On The Dancefloor by The BarKays

OMG, that is the funniest. Seriously.

Talk about a flashback! Love the costume and the songs. Yay for the 80's...

Nice. That is a great costume -- and you look so natural in it!

So fun! I totally remember Breakin' and then the Electric Boogaloo... my babysitter took us all to go see it one summer day and for the rest of the summer we had breakdancing contests in her back yard. Danny, this scrawny blond kid, could catepiller like no other!

The really funny thing is that the only thing I had to purchase was the gloves. I had the rest in my closet already.

I also forgot to mention that when we weren't dancing, we were watching the Breakin' movies on our BETA and playing ATARI.

You grew up on Flinstone Lane?! I think that's the funny part here!

I thought fingerless gloves, especailly when paired with a half shirt with Japanese writing on it, were one of the best parts of 1984.

Breakin'... It was soooo cooool.

Someone gave me the Purple Rain Soundtrack cassette for my birthday that year.

YOu look so natural.

Ain't Nobody is a great song. I remember it from back in the day.

"The really funny thing is that the only thing I had to purchase was the gloves. I had the rest in my closet already. "

Great flash back story! You look so totally awesome in your costume.

Didn't you just LOVE "Stayin' Alive" with Finola Hughs? I wanted to be able to dance like her and I wasn't even a dancer. And I wanted her hair and fancy clothes and cars, too. Oh, the dreams of a mid western girl living in the country!

I LOVE your costume! I wasn't even conceived in 1984, but I'm definitely way into 80s music and movies -it's an obsession!

1984 was the best year EVER! I was 9, watching "You Can't Do That on Television" and rocking out in the basement with my older brothers to "Hot For Teacher" and "Legs".

I thought that was and old picture of you...that is recent?
Why are you having a weightloss challenge?

Hi Jeff - I gained 12 lbs when training for my marathon - I took the "carbo loading" thing a bit too serious. So I just want to drop that weight :)

I love the photo. In 1984 I was going to aerobics class to work off the baby weight, and by the end of the year I was back to my pre-baby size. I had a Pat Benatar hair cut, and wore way too much spandex! I still love 80s music. Half of what is in my iPod is from the 80s.